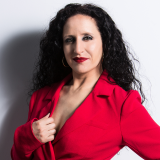 Erotica author and sexpert guiding you to shamelessly explore your sexuality

Looking to spice up your sex life?

Maybe it’s time to try inviting another person into the bedroom.

In fact, according to a survey by the Kinsey Institute, a three-way is the most common sexual fantasy among both men and women.

Furthermore, studies show that about 20 percent of men and 10 percent of women have had at least one ménage à trois in their lifetimes. This is helped by pop culture depictions of threesomes and group play, notably in popular television shows such as "Sense 8," "The L Word" and "Game of Thrones."

According to a study done by the Kinsey Institute, threesomes are the most common fantasy among men and women alike.

That is okay. Threesomes aren't for everyone. If your partner is not into it then don't try to force them. That can only end badly.

Absolutely not, as long as you and your partner have discussed it at length and are both open to it then, have fun!

Plus, we’ll debunk some of the most common myths about threesomes. This can be any combination of participants of any gender and any sexual orientation. In the realm of pornography, you may have watched popular scenes involving MMF or FFM threesomes, which are short for describing threesomes with two men and one woman (MMF) or two women and one man (FFM).

Everyone’s boundaries are respected and there’s active communication beforehand as well as throughout the experience.

People have threesomes for varying reasons, including these popular ones:

There are a number of misconceptions about threesomes that can prevent people from trying them out.

The truth is, threesomes can be extremely pleasurable and fun for everyone, as long as you’re all consenting adults and respecting each other’s boundaries (more on that later).

Here's a look at some of the most common myths about threesomes:

Myth 1: Threesomes are Signs of a Troubled Relationship

The truth is they can help couples:

As we mention later in this article, it’s crucial to make sure that your relationship is healthy enough before you entertain the idea of adding a third to your coupledom.

Anyone of any gender and any sexual orientation can enjoy a three-way!

Threesomes can be a fantastic way to explore your sexuality and learn new things about what (and whom) you might be interested in.

Myth 3: Men are the Only Ones Who Want Threesomes

One of the reasons this is such a popular myth is because of the pornography industry's popular portrayal of men being more into the idea and trying to “convince” their female partner to have a three-way.

Within society, it’s often assumed that men have more sexual proclivities than women, but the fact is, women have been socialized to be less open to talking about their sexual lives and fantasies, because of the potentially negative ramifications and double standards of being labeled a slut.

And also, not all men actually want to have threesomes, either.

Myth 4: People Who Have Threesomes are Cheating on Their Partners

Cheating is broadly considered as being unfaithful to your partner, either emotionally or sexually, without them knowing about it.

Threesomes are not considered cheating because each adult involved in the sex act consents to it.

Because threesomes are consensual, as long as everyone who participates is aware of (and respects) each other’s physical and emotional boundaries, threesomes are not cheating. Here are a few places to search for prospective lovers:

Negotiating your boundaries and comfort levels with both individuals is a different story, but we’ll explore that in later sections of this article.

If one of you is hesitant to try a three-way, or if you’re both not on the same page about your boundaries when it comes to threesomes, then exploring this kind of openness can have damaging consequences to your relationship.

For example, if you’re lacking communication and/or intimacy, have had issues with trust and honesty, and/or have had trouble connecting sexually between just the two of you.

You’ll need to communicate effectively (all three of you), be fully honest with each other, and trust each other to respect each other’s boundaries.

Plus, if you’re not connecting well with each other, then whoever you choose as your third will likely feel the disconnection and negative vibes between you, and that doesn’t make for a fun experience, either.

Now, if the dynamic of your duo is healthy, then you’re ready to explore the next step. Broaching the topic of a three-way can be awkward for you, and for your partner.

Even though you might think it’s just sex, or it’s just physical, you can’t discount the psychological and emotional aspects of any sexual experience.

Expect your partner to say no, whether it’s a no for the time being, or a no even in the future.

If they say no, you must respect their choice and their boundaries.

DO NOT try to convince them or pressure them into trying it.

Enthusiastic consent is key to establish for both of you before you explore opening up your relationship.

With that in mind, here are some tips to initiate that conversation.

Bring it up casually

A better route is to bring it up casually (and hypothetically) and see how they respond.

If your dream intrigues them, then you can elaborate with a few details that center on your partner’s pleasure.

For example, you can mention to your partner: “you were so turned on when "insert celebrity crush here" and I both had our hands on your body, and that really turned me on.”

You can then casually ask your partner what they think about your friend’s experience.

If they show any signs of being intrigued by your dream or the idea of a three-way, then you can go to the next step.

At the beginning of this article, we listed a few popular television shows that contained group sex scenes.

Then it’s more natural for you to ask them things like: “do you find that sexy?” “have you ever/would you ever want to try something like that?”

Sometimes cinematic versions of three-ways can end badly or depict a couple in a bad relationship, and that’s definitely not going to help steer the conversation in a positive direction.

Bonus if it’s a story you’ve written yourself that includes your partner!

If you notice your partner is getting aroused by this lusty literature, then after the story is over (or after your ensuing sexcapades), you can have a more natural segue into asking them whether they’d want to make this story -- or a story of your own -- into reality.

There are many ways to take your partner’s temperature and get a feel of whether or not they’re into the idea.

If they are, then you’re ready to open up your conversation to discuss important things like comfort zones, safety precautions, and who your third could be.

Threesomes are supposed to be pleasurable for all of the partners involved, so it’s important that your third also be consulted and involved in the conversation about what each of your comfort zones is.

Everyone involved should be comfortable and feel respected at all times.

If you don't talk about what you and your partner are comfortable with beforehand and the sex goes into uncharted waters, it can lead to jealousy, resentment, anger, and a lack of pleasure for one or more of you.

Here's a look at some boundaries, best practices, and tips that you should establish as you and your partner add a third person into the mix.

Clearly Communicate What You're Comfortable with

If you’re already in a relationship, it's important that you and your partner are both open and honest with each other first, and make sure you’re both ready to open up your relationship.

Your third’s desires matter, too.

Some things you and your partner, as well as the three of you, can/should discuss include:

When discussing these things with your potential third, this should not be given as a list of ultimatums.

Rather, you should have an open discussion about what each of your comfort level is, and make sure you’re all in agreement about what could happen and how you all feel about it.

Don’t forget that you’re preparing just for this one experience.

Once you’ve had an enjoyable time, then you might change your comfort zones or third partner, and/or explore something different.

In your initial chat about boundaries, you can figure out the best ways for all three of you to protect yourselves.

That includes discussing contraception and barrier methods, whether one of you is sensitive to latex, and also what your current sexual health status is.

Getting tested before you play -- even if you’ve been monogamous for a while -- is important.

Knowing your STI and STD status is a part of your overall health, and also something you can share with your potential third.

It would be wrong to just ask your third about their status if you don’t even know your own.

This knowledge sharing should be 100% reciprocal.

Determine What Positions are Acceptable

Some of these include:

On a similar note, you should also go over a word that anyone can say that indicates that they're no longer comfortable.

This is everyone's cue to stop what they're doing.

You don’t all have to have a safe word, but it can be fun and a good ice-breaker to come up with a safe word together.

Get Prepared, but Have No Expectations

Sure, we all have fantasies and ideas about how we want things to go, but in reality, those things might not happen.

Having high or rigid expectations as you go into it can create disappointment for you, and also put unnecessary pressure on your partners.

So, prepare (mentally and physically) for your three-way, and establish your boundaries, but know from the get-go that it’s a fluid situation and it’s often good to just go with the flow. Keep in mind that it can take some time for you to find your third.

It’s important to take your time and find a good fit, rather than rush the process and end up having a less-than-satisfactory experience.

There are a few ways you can go about finding people who are interested in group sex:

As discussed, threesomes aren't for everyone, but under the right conditions, they can be right for you and your partner.

So, if you and your partner are on the same page, and you’re both excited about spicing up your sex life with the addition of a third person, then going the group sex route can enhance your relationship and enable you to explore your fantasies and sexuality together.

Delay Sprays: How To Use, Tips, FAQs and More Premature Ejaculation Pills: Do They Work?